With its 13 red and white stripes and 50 stars, the current American flag symbolizes the United States of America. Since its conception, it has been a fundamental part of the history of this nation. Existing for over 200 years, it has grown symbolically and physically, from times of crisis to times of success. But do you know its history? Here we tell you all about the history and characteristics of this flag.

The American flag: origin and history

Still nicknamed ”Stars and stripes”, the American flag has very obscure origins. It was designed by Francis Hopkinson and sewn for the first time by Betsy Ross.
Inspired by the British flag, the designer used the color of the coat of arms of the Washington household because of George Washington. He was the most legendary commander of the United States at the time and the next president of the country.
In its original form, the old American flag was officially adopted on June 14, 1777 during the Second Continental Congress. Conservatives have etched this date in their memories and June 14 of each year is now considered American State Flag Day. Over time, the territory of the United States of America has been modified due to the conquests and wars fought by the combatants.
These include the conquest of native territories, the Mexican War, the accession of Hawaii to the US union and the purchase of Alaska from Russia. Each of these events marked the American colors. As a result, there have been many different flags and the flag has undergone a total of 27 changes before it took on its current appearance.

The American flag is called “The Star-Splashed Banner” or “Stripes and Stars”. This means “The Star-Splashed Banner” or “Stripes and Stars”. These names are descriptions of the presentation of the banner. The latter is presented as a large rectangle with three colors consisting of 2 essential parts. The first part, which is the largest, has 13 alternating horizontal stripes of the same width, 7 of which are red and 6 white.
The second part, located in the upper left corner of the flag, is a small rectangle with a blue background containing 50 small white stars with 5 branches. These stars are arranged in 9 horizontal rows of 6 and 5 stars in alternation.
Note that initially, the banner had less than 20 white stars, more exactly 13. 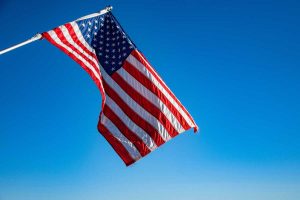 The stars were therefore arranged in a circular pattern on the blue rectangle. As the country expanded, this arrangement changed. There was a problem of space. Nevertheless, all the flags of the United States of America were red, blue and white.
There are strict proportions that are respected in the representation of the flag. These are the dimensions of the large rectangle, the blue canton, the horizontal and vertical distances between two rows of stars and between two stars. There is also a certain diameter for the stars and a certain width for each stripe.

What is the meaning of the American flag?

Through each tricolor flag that they displayed, the United States wanted to send an intense message. With their diplomacy, they tend to impose an idea of justice, equality and freedom.
The American flag, like all the flags in the world, has a very precise meaning and symbolism that evokes the values and ideology of the territory. From the colors to the number of characters to the alignment, everything is placed to convey information.
In terms of the meaning of the numbers, the 50 white stars in the blue canton symbolize the 50 states of the Union. This small rectangle represents the Union. There is also the number 13 in the stripes that the flag contains. It represents the thirteen original colonies that formed the USA when it became independent in 1776.
Regarding the colors red-white-blue, white expresses the purity and innocence of the American people. Red is the symbol of courage and values. Finally, blue evokes justice and perseverance. To go further in the symbolism, it should be noted that the 50 stars gathered in a single rectangle authentically represent the name of the country: the United States of America.

All in all, the American flag was officially born on June 14, 1777. Its origins remain unclear as well as its meaning, which differs from one person to another. However, its presentation remains unique. It is composed of 13 red and white stripes and a blue canton of 50 stars.