In recent years, racism and discrimination have re-emerged in many countries around the world. Whether at work, on the street, on public transport, etc., people are discriminated against because of their race or for other reasons. This causes a series of violent incidents and huge repercussions for these individuals. So, solutions must be found to remedy this.

Racism is an ideology that believes that certain classes of people are inherently superior to others. It is based on the premise that the human race is composed of races. In simple terms, it is a form of discrimination based on the victim’s racial or ethnic origin or affiliation.
It uses preconceived notions to belittle the person directly because of his or her physical appearance. Racism aims to harm the dignity and honor of the individual, to create hatred and to provoke physical or verbal violence. Its goal is to set people against each other.

Discrimination is the process associated with making a distinction between a person or a social class. It involves the creation of so-called “discriminatory” boundaries. In other words, it consists in producing a rejection with the aim of social exclusion on the basis of certain criteria. These are based on religion, intelligence level, gender, health status, ethnic or social origin, etc.
Discrimination is also used to designate the unequal and unfavourable treatment of certain individuals because of a criterion prohibited by law. This includes sex, race, name, physical appearance, origin, language, membership in a religious, political, trade union or philosophical movement, etc.

Racism and discrimination: what consequences?

Racism and discrimination have enormous consequences on the lives of the victims. They aggravate or provoke specific psychological problems. A healthy individual can, by being discriminated against, develop a sensitivity to certain circumstances.
If you are always being checked every time you go out on the street, you may feel anxious whenever you see the police. This anxiety may become continuous and lead to other physical or psychological problems.
There is also a loss of confidence and self-esteem. For example, when you are told that you don’t belong where you want to be, you inevitably lose your self-esteem or confidence. The same is true when you are excluded for unknown reasons. It is impossible to love yourself under these conditions.
Discrimination 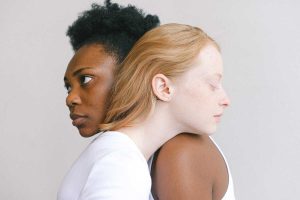 is an injustice that makes you feel powerless. It often causes feelings of guilt and shame. It also creates intense anger, which can be turned against the victim or those around him/her.
In some cases, it causes sadness and despair. This can lead to a real withdrawal. Indeed, how can you open up to others when you no longer trust them, when those around you become your tormentor? Racism and discrimination hurt. They trample, close in and exclude.

What measures should be taken to fight against racism and discrimination?

To fight against racism and discrimination, it is necessary to take concrete and effective measures. Thus, from the youngest age, it is necessary to give a great importance to pedagogy to eliminate racists, homophobes or sexist reflexes.
Even if there is no guarantee that this policy will be effective in the long term, it will go some way towards reducing the phenomenon. To remedy gender discrimination, it will be necessary to rebalance the roles of women and men, both at the family and professional levels. In addition, every company, school, etc. is required to adopt rules to eliminate racism and discrimination.
Furthermore, victims must be encouraged to denounce their aggressors or to refer to the rights defender. In this way, the necessary and appropriate sanctions will be applied. It is essential to ask for help, to speak out or to be accompanied when you are subjected to a form of discrimination. You should not be ashamed to express your anger and discomfort.

We conclude that racism and discrimination are phenomena that have great consequences in the lives of their victims. To fight against them, it is necessary to teach the youngest the notions of equality between human beings, to encourage the oppressed to speak about what they suffer. Specific measures must also be taken in schools, companies and societies where any form of discrimination prevails.